As the grey skies were replaced with the blue last week, a nasty virus floored me for a good 5 days. Bouncing back as best I could with my virus / neurofen hangover I headed out for a sunrise shoot down Cronulla way. (It’s a fair hike from the Central Coast) There was a real money shot I had thought of for months but as the light from the morning graced my scene, I soon realised that the massive construction fence behind the Surf Club was a real deal breaker. So I hunted around and tried to make the most of the situation the rest of the shots are in our Eastern Beaches online gallery. I always work off the shooting philosophy that if you walk away from any shoot with at least one useable (sell able) shot then it is a success.

With such great weather I then headed to Coogee for a swim with my underwater housing. Saturday morning at 7am in Coogee and it was busy. Could hardly find a park anywhere. Down on the beach I passed a guy getting out of the surf and made the usual inquiry regarding water temp. “Warm as soup I was told” with out hesitation. Nice… well I can tell you now, that guy must like his soup on the cool side of things. Where not far off wetsuit time I think.

The leaves in the Blue Mountains are turning quickly. Especially places like Mount Wilson will be an explosion of colour. I have my list of pre planned / visited locations to shoot, now it is just a case of waiting for the right conditions to head out and shoot. When you want sun you get clouds, when you want clouds you get sun. The photographers dance with mother nature. As soon as the conditions are right, i’ll be up there.

I have also added a few other shots from my recent outings down Swansea way that are now back from the lab. To catch all of them head to the Newcastle Online Gallery. 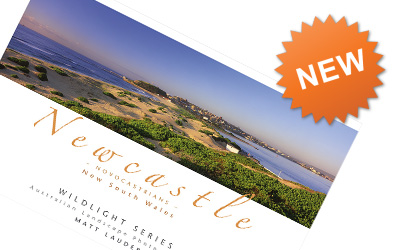 :: Check out this favorite shot of ours

This is the amazing view from the Shangri-La Hotel a 5 star hotel that sits on the iconic Sydney Harbour. This shot was taken on dawn using a panoramic film camera shooting through the thick glass windows. Quite a challenge but when you pull it off the result is nothing shy of amazing.