Well after pouring rain and then totally clear sky’s all the right elements fell into place to put the Lee Big Stopper 3.0 Neutral Density Filter

to the test and to compare it to the B+W 77mm ND Neutral Density 3.0

With my initial review on the filter I have based my testing on the images produced during the middle of the day and I just wanted to show the filters basic difference from the B+W 3.0 (10 stop). Also I have shot the images with the Canon 5D MkII on the 24 – 70 f2.8 lens so I may make the odd reference to some of the systems with that camera setup. All my testing is done on my hardware calibrated monitor. So you may have different results if your not calibrated.

First off for all those who are looking to buy one, the filter comes wrapped in tissue paper with a special seal “Warning to not accept it, if the seal is broken” not sure what that is about but anyway it comes with its own black padded bag which is nice. The filter is glass which is great (wish the ND grad filters were). The filter inserts easily into the Lee filter holder and the special foam to make it light tight rubs gently on the filter holder which gives me the impression that worrying about foam coming off over time due to use isn’t an issue. At first inspection when the filter is inserted you might think it wont be light tight but when you clip it onto the adapter ring it is. But I will be totally convinced when I see my film shots with the filter. 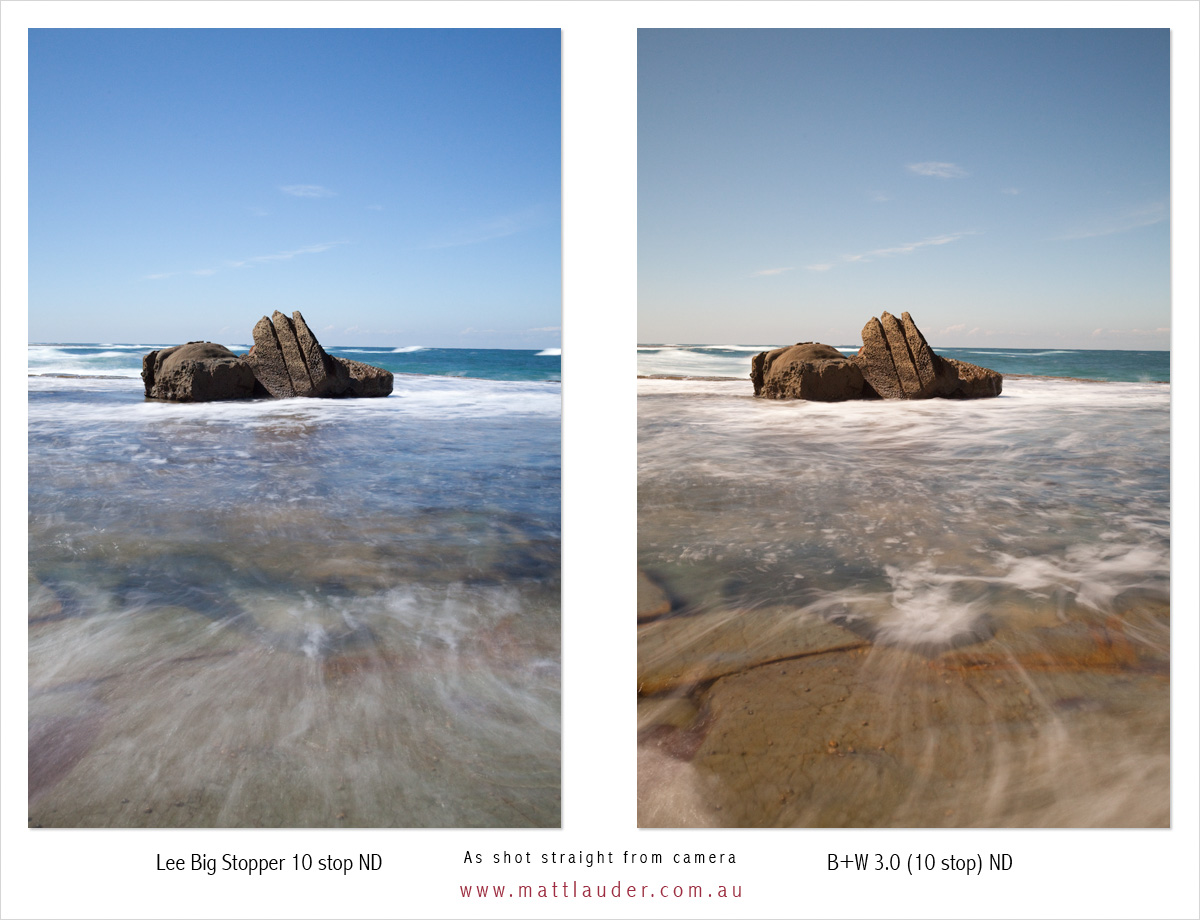 Straight out of the camera you will instantly see that the Big Stopper is cooler over the B+W filter by exactly 1000 kelvin according to Adobe Camera RAW (ACR). Big Stopper is 5580K and B+W is 4580. Whats weird is how the B+W’s image looks warmer but has a cooler colour temp and vise versa, but makes sense if you think about it. With each of these shots they are straight out of the camera and where captured on Auto White Balance.

Now whats worth noting is what happens if you adjust the colour temp by 1000 k in each shot in ACR. So for the Big Stopper I will change it from 5580 to 6580 (this is to warm it up to match the B+W image) and with the B+W I have changed it from 4580 to 3580 to cool it to match the Big Stopper. The results are in the next two images. 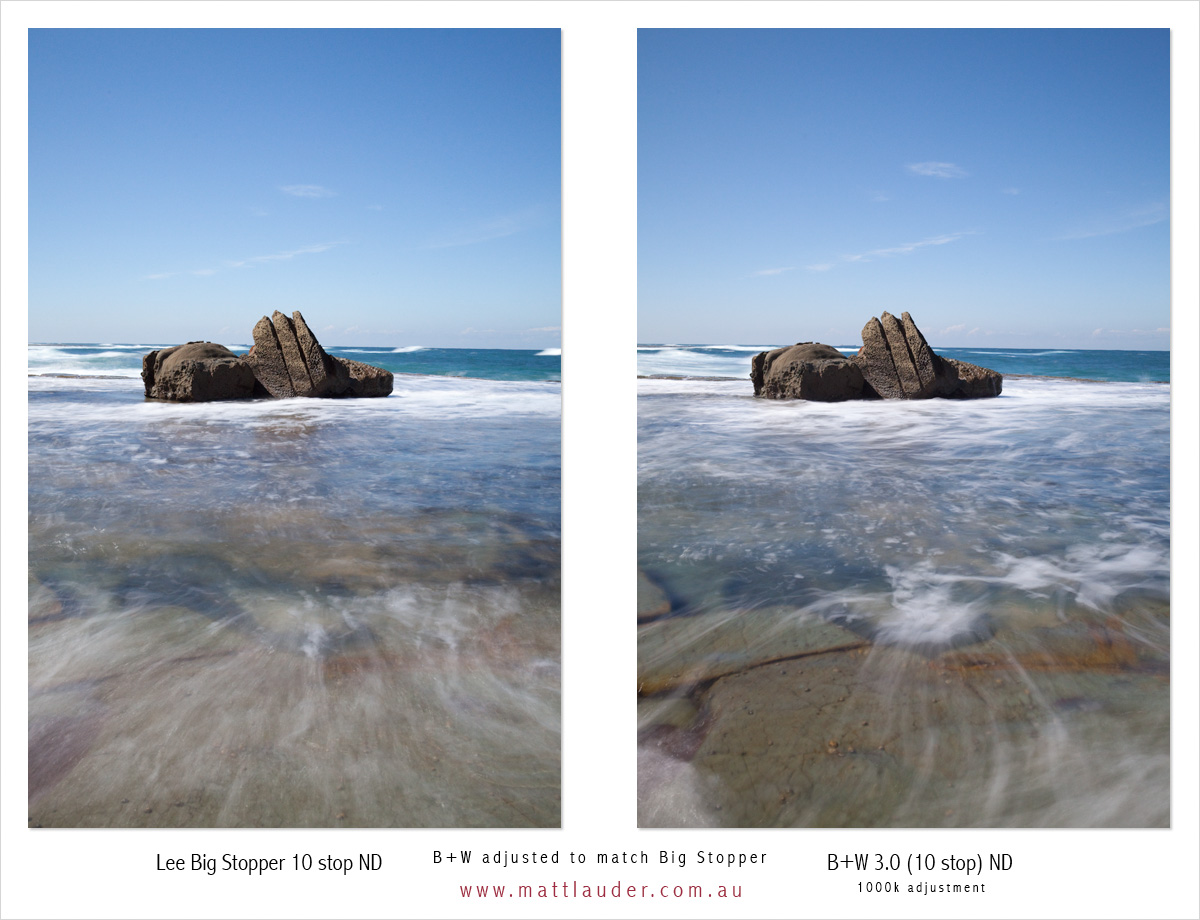 I personally found the Big Stopper warmed better and the B+W cooled better in ACR. Now that’s weird… but subject to personal taste. When shooting with the Big Stopper and then changing it with the B+W with the same exposure settings there is negligible change in the histogram especially in the area of it either brightening or darkening the image.

Auto focus with the Big Stopper either with the AF-On button in live view or the old fashioned way I found is the same… almost impossible. So manual live view focusing or without the filter is the way to go. Whats great with the Big Stopper was on my first shot with it I accidentally left the camera on Auto focus so when I went to take the shot it started to search for a focus point. Fixing this error was simple, pulled the filter out, focused and I was back in action. Making this error with the B+W is a pain in the ass, even more so if you have the lee filter kit with a ND grad in there as well.

This is my first shoot with the filter and on first impressions and results I think it is a great product with no faults. If you already owned a B+W 10 stop I would only buy the Big Stopper if you wanted the freedom of a slide in and out 10 stop filter and the ability to reduce vignetting that may result if you have the B+W screwed in and then the Lee Filter system attached.

What about on film:

I also shot images on slide film with the Fuji G617 with both 10 stop filter systems. I have a suspicion that one will be clearly better over the other and seeing that it is film it wont have the RAW flexibility for adjustment. After seeing the results on digital and also from shooting long exposure with the B+W 10 stop on slide film before I think the B+W will come out on top over the Big Stopper. Time will tell I guess when I have the film processed next week.

Well seeing that I shoot film I will make part two my review of the filter on slide film. I have shot with the B+W 10 stop for about 6-7 years… long before it became the rage with digital. So for you film shooters keep an eye out for this next review.

Any questions or feedback is most welcome.

This entry was posted in Product Reviews and tagged B+W 10 stop ND filter, lee big stopper 10 stop, lee filters 10 stop ND, lee filters vs B+W filters. Bookmark the permalink.
Did you like this post? Why not share it, it really helps us keep great content coming.